A Smile to Cover the Pain 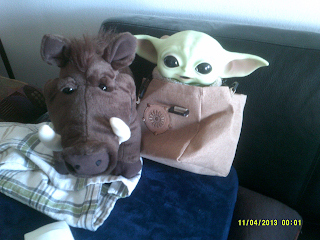 After I got a stuffed Pumbaa on clearance from Build-A-Bear last year, I went and looked up his theme song from The Lion King (both versions):  "Hakuna Matada."  In both instances it's mostly an upbeat song about not sweating the small (or big) stuff.  But then there's a section of the song focusing on Pumbaa's background:

Why, when he was a young warthog
When I was a young wart-hoooog!
Very nice!
Thanks!
He found his aroma lacked a certain appeal
He could clear the Savannah after every meal
I'm a sensitive soul, though I seem thick-skinned
And it hurt that my friends never stood downwind
And oh, the shame
(He was ashamed!)
Thought of changin' my name
(Oh, what's in a name?)
And I got downhearted
(How did you feel?)
Every time that I-
Pumbaa! Not in front of the kids!
Oh... sorry

It's kind of a funny story, right?  His farts were so smelly that other animals didn't want to hang around with him.  In the live action version, baby Pumbaa's farts scare away a herd of zebra from a watering hole.

And yet under that joke is a note of tragedy.  I mean, think about it:  Pumbaa was basically abandoned by everyone, which would probably include his mother and any siblings.  That or he'd already been separated from them.  Like Rudolph in the old Christmas special he was forced to grow up on his own for a biological problem he couldn't control.

It's pretty sad if you think about it.  But who does think about that?  Not many people.  And even Pumbaa is over it by the time he meets Simba.  After the song it's never brought up again.

To add to the tragedy of Pumbaa, do you know what his name means in Swahili?  According to Google:  “to be absentminded, careless, foolish, ignorant, lazy, stupid and negligent.”  Ouch.  That was probably some Disney writer's idea of a joke, but if you think of it in context of the character, it'd be like your mom naming you Loser or Shithead or Donald J Trump.  Poor, poor Pumbaa.

But I think there is a tendency by viewers or readers to overlook darker, more horrific things if something appears to be happy.  In the "Rebuttals" entry at the end of last month I talked about how a reviewer who frequently lamented "crappy endings" of other Eric Filler stories loved the end of Pool Hustle Swap even though it didn't entirely end Happily Ever After.  The main character found someone to love and was having a baby, but she'd lost her talent for pool in the process.  Similarly in The Comeback by Eric Filler (or the re-edited version The Last Encore, by me) the main character finds love and happiness but at the cost of losing her fame and fortune.  So they're not truly happy endings, but no one whines about a "crappy ending."