Insecure Wednesday: After 7 Years, I Can Definitively Say Reader Magnets Only Partially Works 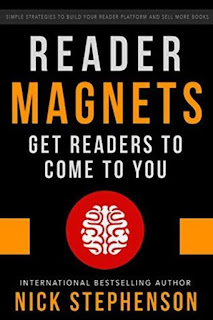 Over seven years ago in August of 2015 I read this Reader Magnets book and decided I would apply its lessons--or as many as I could.  I made a website, I put some books for free, I created a newsletter, and to get people to sign up for the newsletter I held back a book I'd written to give to people.

And the results were...meh.  The one thing that does work is making the first book of your series free.  I got a ton of sales for the other two Chances Are books when the first one became free.  I still get people buying the other two books occasionally even though they've been out for 9 years.  It works less often for some of the Eric Filler ones but I do sometimes still get people buying the other two books in the Gender Swap Challenge series.

I think the caveat is that it works better for a series that's a continuous series and not an anthology series.  For a series like the original Transformed series by Eric Filler, where each book was a different thing, making the first six books free didn't mean people would buy the other books as much--though some still do.  Whereas with Chances Are or Gender Swap Challenge that have a recurring character, people are more inclined to buy the other books to read how the story continues.

The average open rate for my newsletter is about 35%.  And that's actually really good by industry standards.  The average click rate though is only about 15%.  Put it this way:  if I have 440 subscribers and 15% click a link, then that means 66 people clicked something.

And that's just clicking anything.  It could be my book or (more often) it was the free book by someone else I'd put in there.  Or it could be a link to Goodreads or Amazon or something else, though again that was less likely.

A couple months ago I got tired of putting free books in and just put my book in.  The click rate dropped from about 15% to about 5%.  So of 440 people, maybe 22 would actually click on the page for my book.  How many would actually buy it then?  That's harder to say.

What definitely did not work was this whole putting a free book in the newsletter thing.  The idea in Reader Magnets is you put this free book in and people think you're a great guy and so they want to buy your books.  Basically it's like Miracle on 34th Street where Santa tells people where to get a better deal than Macy's and so people decide to buy stuff from Macy's out of gratitude.  I can tell you that this idea is bullshit.  At least with my readers.

Instead what happens is you get people who just sign up for free books.  Most of the unsubscribes when I drill down into their history, if they clicked anything it was just free books.  So it's most likely those people didn't do anything for me.  Instead of shopping at Macy's, the people in real life would have kept shopping at other stores and going back to Santa to ask for more deals and then get pissed if he stopped telling them.

This still works best by the junk mail philosophy:  if you get lots and lots and lots of subscribers then even if only 5% click anything, that will be a lot of clicks.  Even with free books (I've had at least 4 different ones in the last 7 years) and putting an ad in my books, I still don't get the thousands of subscribers I would really need for this to be extremely successful.  Because it is just a numbers game.  Like I said, it's the junk mail philosophy that the vast majority of people will throw it away, but if a few buy the product or service, then you make up for the cost of the mail.  I don't know if I really sell enough books from the newsletter to pay for the website; it's hard to say since people buy the books from Amazon and not directly from me.  It would probably work better if I were writing in a more mainstream genre, though then you still have the problem of getting people to notice you to sign up for the newsletter and all that.

Anyway, as I said, it was partially successful, so that's not nothing.  But like most of these things, it's probably not going to make you rich and famous overnight.